The Mars Hydro SP-3000 is an impressive fixture. It is brand new model being released in July 2020. It is a significant upgrade over the previous generation of SP fixtures. It shares a similar chassis with the older SP models but features top of the line Samsung LM301b diodes and a 300-watt Mean Well driver. It is 108cm (42.5”) long in a bar shape. Since it is a single bar, I was concerned about its edge and corner coverage, but I was very impressed with the performance in my PAR test.

I tested the the SP-3000 in a 4×2 space. It produced one of the best PAR maps I have seen. At a height of 50cm (19.5”) the center reading was 999 µmol. The lowest reading that I recorded was in a corner with 734 µmol. Most fixtures cannot keep their corner readings above 500 µmol. The SP-3000 kept all the corners above 700 µmol and the corner squares were the only regions that were below 800 µmol. That is really an exceptional distribution of light.

In addition to an amazing PAR map, the SP-3000 has a superior Photon Efficiency. I measured a Usable PPF of 630.3 µmol with a power draw of 297 watts. That is a Photon Efficiency of 2.12, which competes with some of the best fixtures on the market. However, none of them can compete with the SP-3000 on cost. The SP-3000 comes in at only $0.63/µmol. These numbers are almost too good to be true – but they are true, I tested it myself.

In addition to having superior efficiency and an outstanding distribution of light, the SP-3000 has a few other cool features. It has a very easy to use dimming knob on a control box that is mounted on the top of the fixture. You can connect several fixtures using an ethernet cable (included) and then control them all with one master fixture. I tested the dimming function and at 50% on the dimming knob, both the PPFD reading and the power draw were almost exactly half of their full power.

Most of the LED diodes are Samsung LM301b. However, the SP-3000 also features Osram 660nm diodes which help fill in the red spectrum. All of the diodes are coated in a waterproof seal which protects the lamp in humid grow tent conditions.

The fixture did not run too hot in my test. I measured the temperature of the heat sink at 122f and the driver got up to 148f. It is a large single driver powering the 300-watt fixture, so I was not surprised that it got warm. Fortunately, the driver is removable and comes with a 2-meter (6’) cord. If temperatures run too hot in your tent, you can easily remove the driver and locate it outside the tent. Conversely, if the tent is too cold you can leave the driver mounted on the fixture.

As soon as I took my first PPFD reading in the corner of the test area I was sold on this light. I actually thought there must be some mistake and I reverified that the center was under 1000 µmol. The PAR map is impressive, the efficiency is superior, and the price is a bargain. I have not seen a better 300-watt fixture for a 4’x2’ grow space. Not just at this price, but at any price! Two of these in a 4’x4’ tent would be amazing. The SP-3000 can probably easily cover a slightly larger space than the 4’x2’. I have two of them and will run some additional tests in alternative areas both individually and together. Look forward to seeing how the 2 of them do together in 4’x4’ and 5’x5’ grow spaces.

NEW VIDEO with all the Additional PAR tests is now LIVE! Check it out! 5 Total PAR tests with the SP3000s and a fun exploration of Grow Light Physics!

I give the SP-3000 my highest recommendation. It is an awesome fixture and I am sure that any grower will love it. 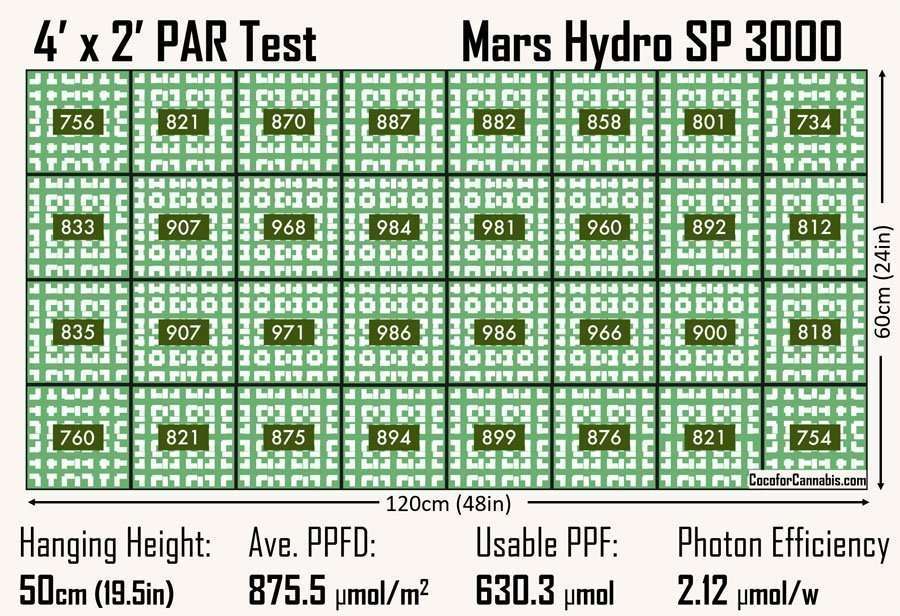 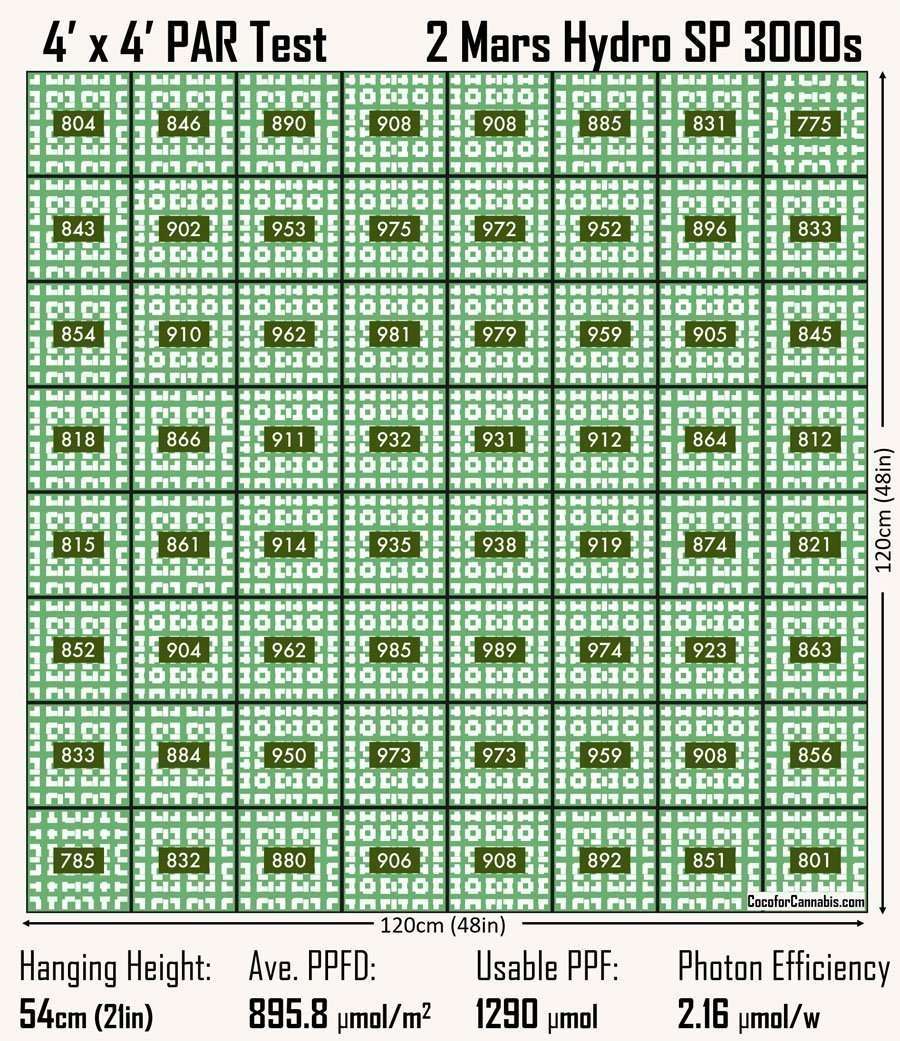 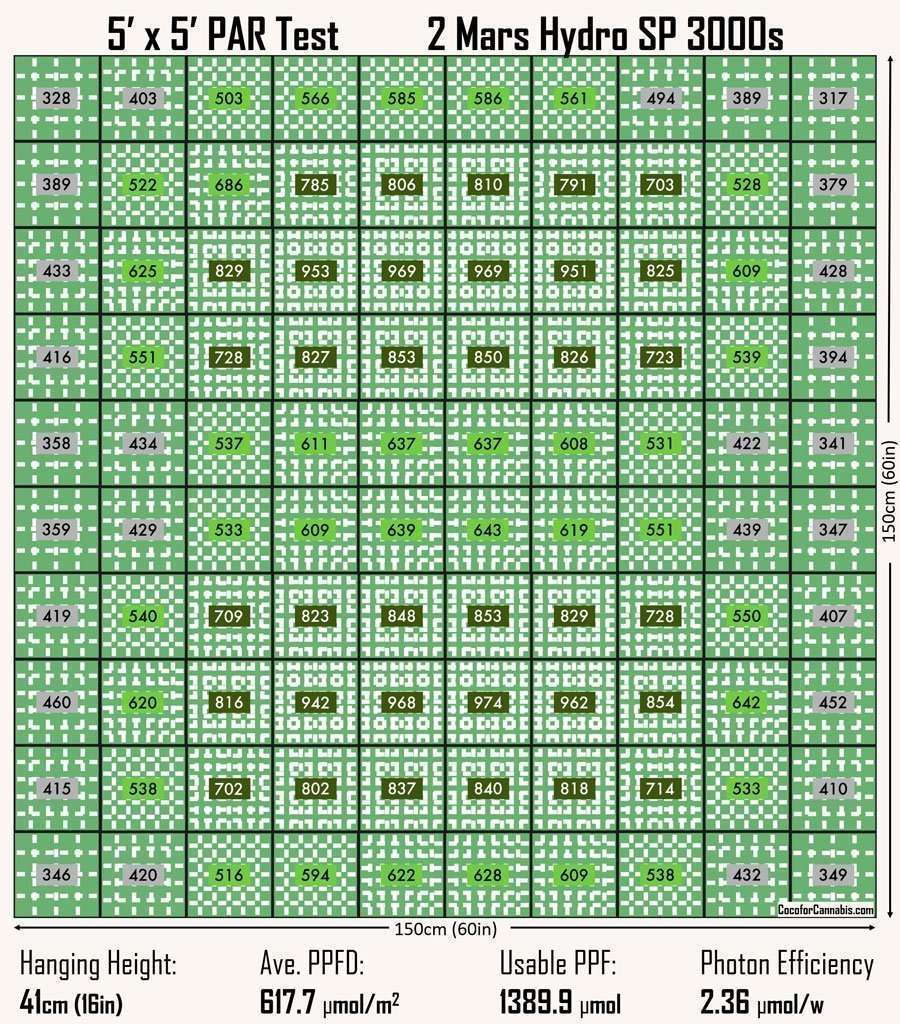 Save Money and Support CocoforCannabis

Shop Mars-hydro.com and use Code: CCFC

Save Money and Support CocoforCannabis

Shop Mars-hydro.com and use Code: CCFC

See the winner & submit your photos! Sent in by lights.soil.seed.ACTION

Get “A Grower’s Guide”

Photo of the Week!