The Photontek SQ 300w PRO is an excellent new fixture designed for 3’ x 3’ or up to 1m x 1m coverage. It has a cool design, with LED Bars in three concentric squares. This design produces an excellent distribution of light across the coverage area. It features an ideal spectrum for growing cannabis with ample red and far-red light. Because of its spectrum, I ran it through our standard PAR test (400-700nm) and an extended PAR test (400-750nm).

The P-tek SQ 300w PRO and SQ 200w PRO comprise the new SQ series from Photontek. They are the first fixtures from Photontek that are designed for smaller coverage areas (3’x3’ and 2’x2’). Like all Photontek equipment, they are sleek, solid, and well made.

Photontek is the sister company of Lumatek EU. The SQ series are upgraded versions that are based on the design of the Lumatek ATS series. The new SQ series fixtures feature the Photontek clear glue coating, and an improved design which allows more diodes closer to the corners.

Photontek uses top-rated diodes on the SQ series. The brand and models are trade secrets, but I reviewed the technical specs and they match the performance of the industry leaders. There are 576 full spectrum diodes at 4000k, 24 Red diodes at 660 nanometers, and 24 Far-Red diodes at 730 nanometers.

It is notable that the Photontek SQ 300w PRO puts 12% of its power into the Far-Red 730nm diodes. Far-Red light (700-750nm) is abundant in sunlight and High-Pressure Sodium light. It has long been known to affect plant morphology, but it is outside of the range of light that has been considered “Photosynthetically Active Radiation” (PAR).

PAR has been defined as a range of light from 400-700nm (McCree, 1972). Emerson and Lewis (1942) first observed that there is a rapid decline in photosynthetic efficiency above about 685nm. However, Emerson also led the research that discovered there is a synergistic enhancement when light above 680nm is applied together with shorter wavelength light. This phenomenon is known as the “Emerson Enhancement Effect” or simply the “Emerson Effect”. However, the role of light above 700nm in photosynthesis has long been discounted.

Recent advances in LED and laser technology have enabled researchers to more carefully examine the synergistic role that Far-Red light plays in combination with shorter wavelength light to excite Photosystems I and II and contribute to overall quantum yield. Shuyang Zhen, Marc van Iersel, and Bruce Bugbee have led pioneering research. They explain that “far-red photons elicit photosynthetic activity equal to PAR photons when delivered at up to 30% of the total photon flux” (Zhen, van Iersel and Bugbee 2021). They go on to explain that “the definition of photosynthetic photons, and efficacy measurements of horticultural fixtures, need to include far-red photons because this extended range [400-750nm] (referred to as ePAR) better predicts photosynthesis” (Zhen, van Iersel and Bugbee 2021). This is revolutionary science and has the potential to redefine PAR. The researchers propose the label “Extended Photosynthetically Active Radiation” (ePAR) for the range of light from 400-750nm. 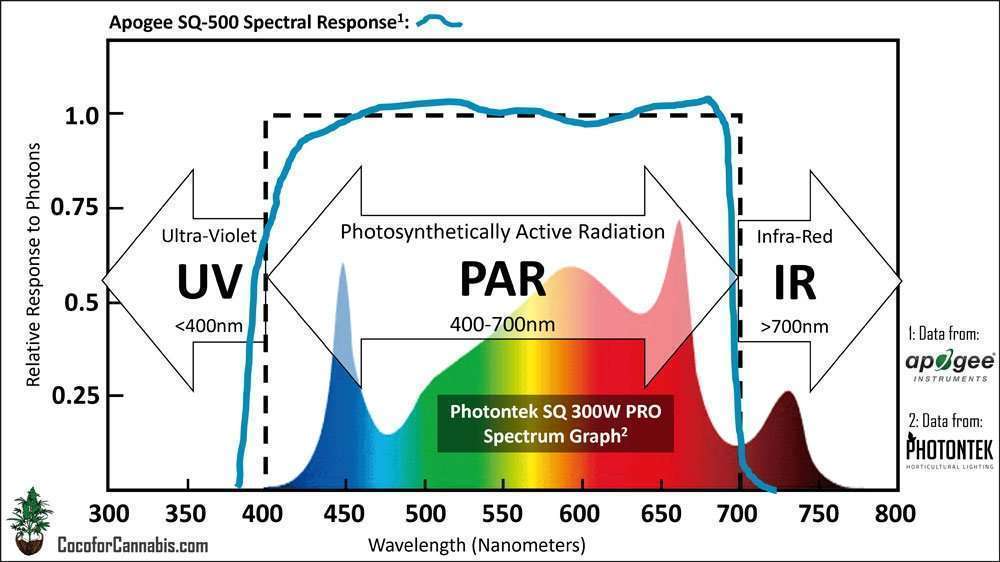 For our PAR tests, I have always used an Apogee SQ-500 sensor, which is specifically tuned to measure only the PAR photons (400-700nm). Many fixtures have diodes that are designed to produce Far-Red light, usually 730nm, but this light is not measured in a traditional PAR test. Furthermore, when evaluating fixture efficiency based on traditional PAR, the power that goes to 730nm light is measured, but the 730nm light itself is not. We have known and considered this, but we justified excluding Far-Red light because formerly it was considered insignificant for photosynthesis. The latest research by Zhen, Bugbee and others suggests that the exclusion of Far-Red light is no longer justified.

In light of this new research, Apogee launched their newest SQ-610 ePAR sensor. The SQ-610 is specifically designed to measure the newly defined ePAR range of 400-750nm. I discussed the new sensor with Apogee, and they agreed to send me one for use in my testing. I will continue to use the Apogee SQ-500 PAR sensor to set up our official PAR tests. The Photontek SQ 300w PRO is the first fixture that I will also test using the Apogee SQ-610 ePAR sensor.

The statistics from the official PAR test are solid. The SQ 300w PRO delivered an average PPFD of 765.6 µmol/m2 which equates to a Usable PPF of 620.1 µmol. I measured a power draw of 313 watts during the test, which would equate to a Usable PAR Photon Efficiency of 1.98 µmol/w. However, as we discussed, 12% of that power, about 37.5 watts goes to Far-Red light which is not measured in the standard PAR test. If we subtract those 37.5 watts, the Usable PAR Photon Efficiency is 2.25 µmol/w, which is excellent for a fixture this size.

By subtracting the PPFD values in the PAR test from the ePPFD values in the ePAR test, we can evaluate the quantity and distribution of the Far-Red 700-750nm light. There is some sampling error for each individual measurement, but that should wash out over the 36 samples to generate an accurate average density of Far-Red light. In the data below, we can see that the average density of Far-Red light was 75.8 µmol/m2, which equates to a Usable Photon Flux of 61.4 micromoles. 12% of the fixture power, about 37.5 watts goes to the Far-Red diodes, which gives them a Usable Photon Efficiency of 1.64 µmol/w. 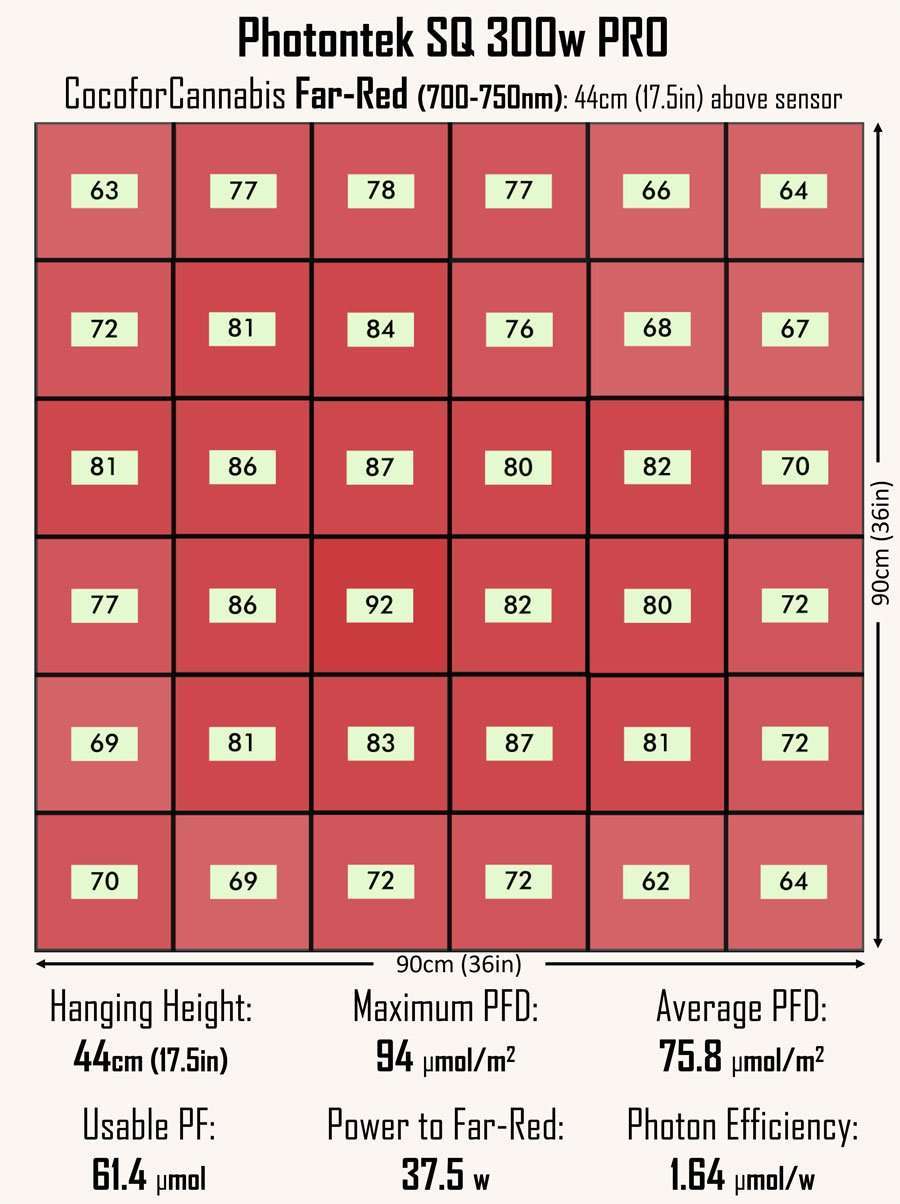 After running the fixture for several hours, I measured its temperature. The LED bars were hottest on the inner ring at 50.4C (122.7F). the outer rings had somewhat cooler temperatures in the mid and high 40s Celsius. The Photontek driver is mounted in a casing on top of the squares. The hottest temperature I measured on it was 50.6C (123.1F).

That was a lot of data and a very deep analysis, so let me cut to the chase. The Photontek SQ 300w PRO is an exciting fixture! The distribution created by the square design is exceptional and will lead to excellent photosynthetic efficiency in a 3’ x 3’ space. The significant investment in Far-Red light should be counted as an asset rather than held as a liability against efficiency. When we do that, it is clear that the Photontek SQ-300w PRO is a leader in terms of photon efficiency among small form factor fixtures on the market. I do not believe that there is a better grow light designed for 3’ x 3’ coverage.

The list price for the SQ 300w PRO is $429 USD. However, we have a 10% discount code for all Photontek equipment: Use Code CocoPTK on Photontek-lighting.com. With our discount the price comes to $386. In terms of ePAR, that is only $0.57/ µmol. It is an excellent price for this cutting-edge fixture. 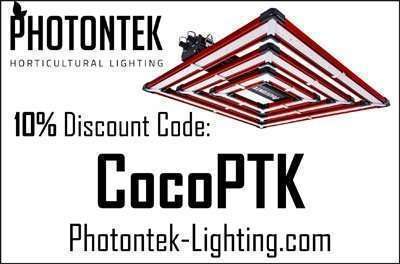