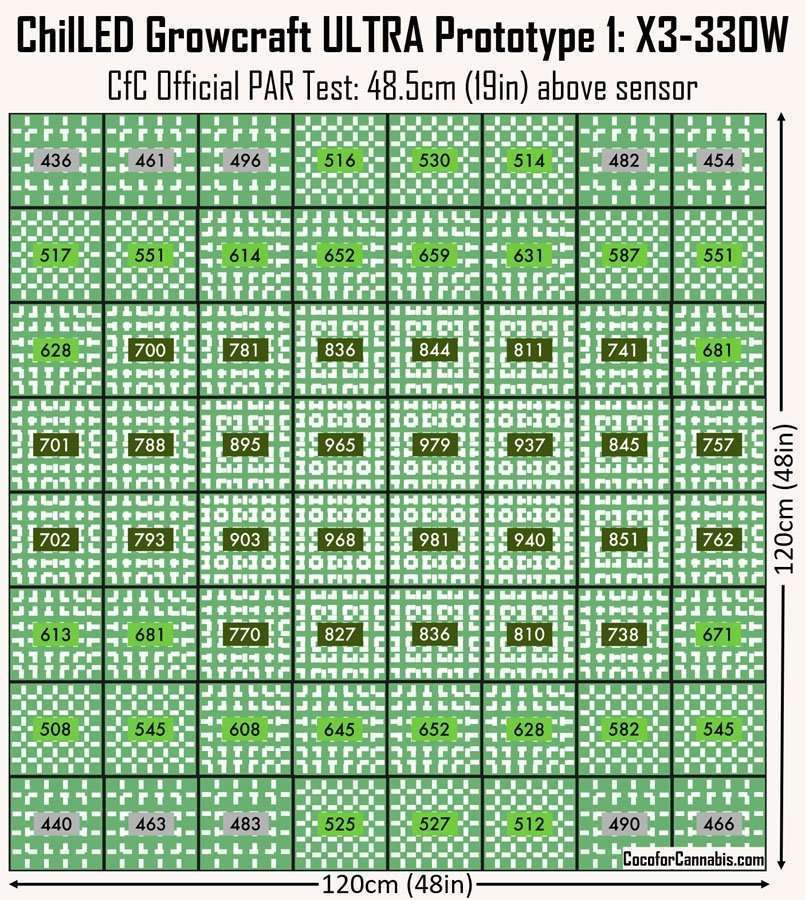 I have seen the future… and it is BRIGHT!

The new ChilLED Growcraft ULTRA Prototype 1 may be the most efficient grow light that has ever been produced. The engineers at ChilLED set out to demonstrate what is possible with efficacy. It led them to create this “concept light” which blows every other fixture away. The Prototype model that I tested is going to be available as the ChilLED Growcraft ULTRA X3-330w. It will come at a steep price, but it is an exciting sign for the future of horticultural lighting!

Austin, from ChilLED reached out to ask me to test the light. He couldn’t tell me much about it, just that it was special. At CocoforCannabis, we consider ChilLED to be in the top tier of LED manufacturers, so I knew it was going to be a great light. I figured it would probably be the most efficient light in our library. I thought it would be a good light to have for comparison – even if it was going to be too expensive for most growers to afford.

The Growcraft ULTRA Prototype 1 has top of the line components and a build quality that feels like it is aircraft grade. One secret to the efficiency is the diodes. For a 330W fixture, about 1000 diodes is typical and respectable. ChilLED incorporates a mind blowing 4104 diodes into this Growcraft ULTRA Prototype 1 – X3-330. There are full spectrum and deep red diodes, but the specific data about them is being kept as a trade secret. Suffice it to say, they are top end ultra-high efficiency diodes. The power is supplied by an oversized Mean Well driver, which is another key to the efficiency of the overall system.

At the time of my testing, there was no published information about the X3-330W version of the Growcraft ULTRA Prototype 1. I was not sure what the intended coverage area is. To determine the size of the test area I used the data from the integrating sphere test report that ChilLED commissioned for the larger X6-600W version.

In the integrating sphere, the Growcraft ULTRA Prototype 1 X6-600W had a Total Photon Efficiency of 3.19 µmol/w, which is truly remarkable. Our Grow Light Calculator estimates that a fixture with a Total Photon Efficiency of 3.19 µmol/w will deliver a Usable Photon Efficiency of 2.76 µmol/w. With that unbelievable efficiency, the calculator suggests that the X3-330W version of the Growcraft ULTRA Prototype 1 will cover 14 square feet. Following our Grow Light Testing Protocol, I ran the first test with it in a 120 x120cm (4’ x 4’, 16 square foot) test area.

The fact that a 330w fixture rated for a 4’ x 4’ test is remarkable. However, the numbers from the calculator seemed too good to be true. I thought 16 square feet would be a stretch. Amazingly, the ChilLED Growcraft ULTRA Prototype 1 – X3-330 did even better than the calculator estimated!

Our official PAR tests always have a maximum PPFD of 1000 µmol/m2. In the 4’ x 4’ test area, I was able to get that density from the Growcraft ULTRA Prototype 1 – X3-330 at a hanging height of 48.5cm (19in) above the sensor. Despite the large 16 square foot test area, the lowest PPFD is a respectable 436 µmol/m2. The distribution of light is great across the canopy. The only regions below the 500 µmol/m2 threshold are tucked into the corners.

The average PPFD in the official test was 672.0 µmol/m2. That means the Growcraft ULTRA Prototype 1 – X3-330 delivered a Usable PPF of 967.6 µmol. It drew 347 watts during the test, which means that the Usable Photon Efficiency is 2.79 µmol/w. That is insane! It is slightly better than the calculator predicted! It is the most efficient fixture we have tested by far. It is the most efficient fixture that I have even heard about. Other companies advertise Calculated or Total PPEs in this range, but I guarantee you none of those lights deliver a Usable PPE anywhere close to this. ChilLED just broke the scale.

I decided to see if I could get the corners up to 500 µmol/m2 by raising the fixture. I raised the Growcraft ULTRA Prototype 1 – X3-330 up to 60cm (23.5in) above the sensor. At that height the corners were all very close to 500 µmol/m2. The distribution is better, but the Usable PPF is lower.

The Growcraft ULTRA Prototype 1 – X3-330 performed very well in the 4’ x 4’ tests. I was curious to see how well it could cover a 5’ x 3’ area. The dimensions of the X3-330W version are 50 x 108cm (19.5 x 42.5in). It would seem to be better suited for rectangular coverage. However, LED bar arrays tend to distribute light better from their broad sides than from their ends. I was not sure if the Growcraft ULTRA Prototype 1 – X3-330 would fully light the 5’ long space. 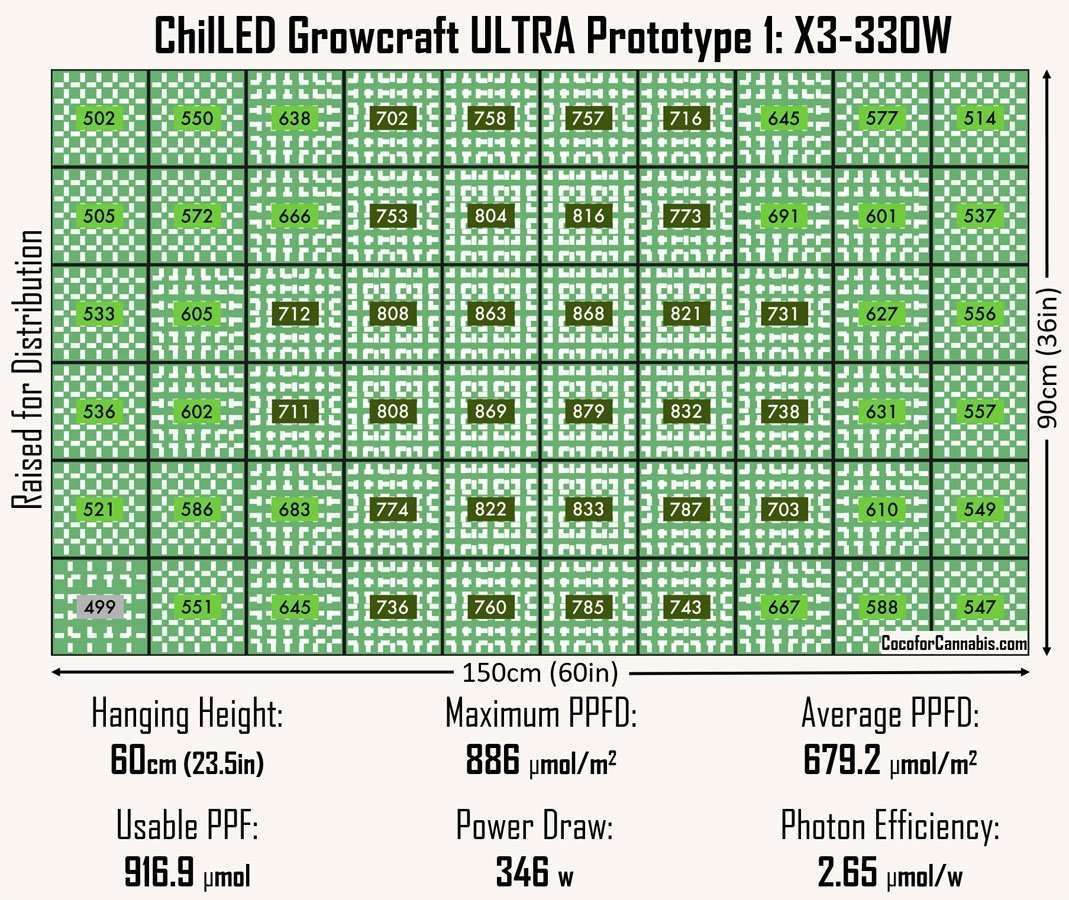 The ChilLED Growcraft ULTRA Prototype 1 – X3-330 is an exceptionally efficient light. So much so that it barely gets hot. The PPFD data from the Quantum sensor was impressive, but I was almost more impressed by the temperature data from the heat gun. The hottest temperature I measured was a lukewarm 35.5C (96F) on the LED bars. Running this light would dramatically reduce the need to run air conditioning or otherwise manage the heat.

The Growcraft ULTRA Prototype 1 is a remarkable fixture. It will work amazingly in either of the tested coverage areas. However, it is not going to be an affordable fixture for most growers. They have not set a retail price yet, but it is going to be expensive. The cost efficiency is not the selling point for the ChilLED Growcraft ULTRA Prototype 1 – X3-330. This light is for those who want the very best light at any cost.

Many growers won’t be able to afford the The ChilLED Growcraft ULTRA Prototype 1 – X3-330. However, I think all growers should be encouraged by what this means for the future of horticultural lighting. Not long-ago fixtures that got a Usable Photon Efficiency of 1.8 µmol/w were unaffordable – but the prices have come down dramatically. Hopefully soon we can all use lights that get a Usable Photon Efficiency of 2.8 µmol/w and deliver perfect density light to all corners of the canopy. The future of horticultural lighting is bright! 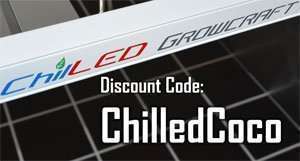 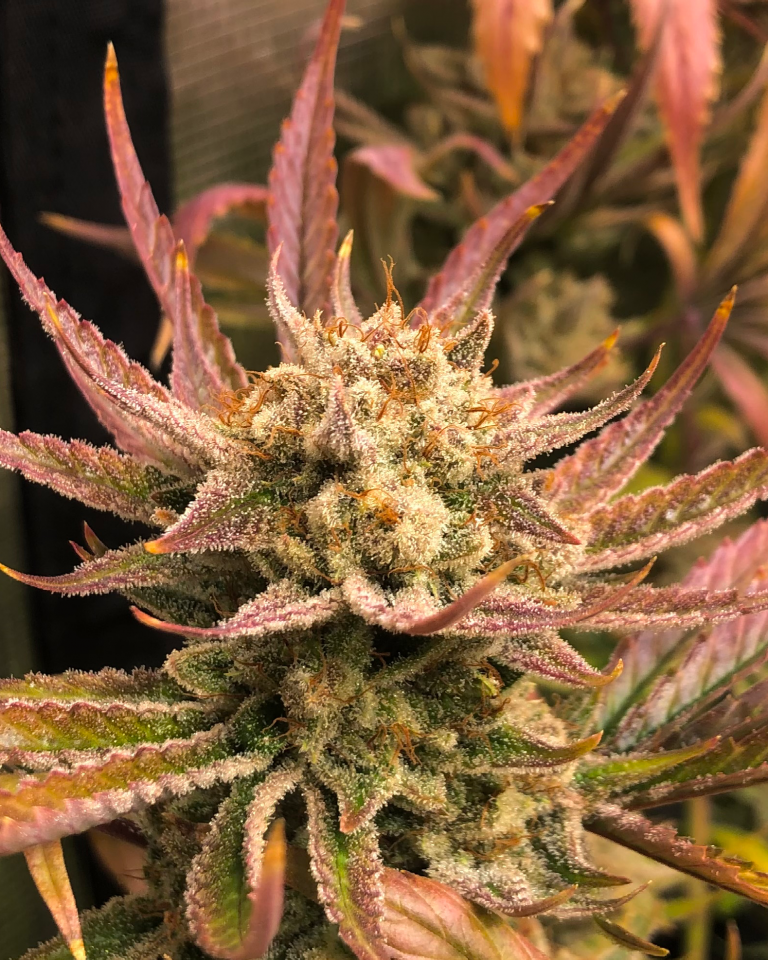