The common name, Two-Spotted Spider Mite, refers to two of the mite's typically visible caeca, or intestinal pouches, arranged near their backs that, when filled, appear as two dark spots. The Spider Mite has more intestinal pouches, and sometimes they are all visible at the same time, or no caeca are visible due to being empty or obscured. While not all mites and arachnids produce silk, spider mites are mites that spin webs, which is the reason for their “spider” moniker. 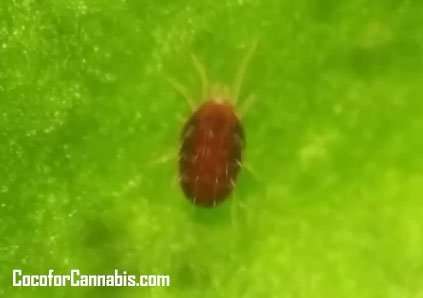 The binomial, or scientific name, Tetranychus urticae, is composed of a genus name first and a species name second (which can sometimes be followed by subspecies and other nomenclature). The name can be transliterated as “Four-claw” from Ancient Greek Tetra (τέτταρες/téttares, four) and Nychus (ὄνυξ, claw) and a derivative of Latin ūrere, “to burn”. The genus, as well as the entire family name, Tetranychidae, references their possession of two pairs of claws on the last segment of their leg, the tarsus. The species name could be a literal reference to their often red coloration, like fire, or be a figurative reference to the mite's status as an irritating pest and its ability to cause widespread damage to crops.

Two-Spotted Spider Mites have been documented on well over 1,000 different host plants, both agricultural crops as well as uncultivated species. This is primarily because the mite's physiology is highly adapted to dealing with a wide array of plant defenses. Ancient bacterial and fungal genes were embedded in its genome in a distant ancestor that can break down plant compounds and increase pigmentation content, respectively. However, because Spider Mites are so globally common and exist on so many species of plants, specialized populations have developed after living and reproducing on a specific plant for many generations. Facilitated by increased and continuous Cannabis cultivation on both commercial and residential scales, Spider Mite populations preferring or specializing on Cannabis are likely to have occurred already.Their natural, toxin-defeating traits have also neutralized synthetic pesticidal and botanical compounds, making them particularly difficult to manage for organic growers and those relying on the natural defenses of plants.

Some research into the origins of this species points to speciation in what is now South America millions of years ago. The Two-Spotted Spider Mite was then introduced into various agricultural systems through the use of naval trade routes a few centuries ago. Like many arthropod pests, this species has haplodiploid sex-determination, meaning that a singular female produces unfertilized eggs which become males, and fertilized eggs that become females. Females will mate with male progeny to produce more females, and this means that only a single female is necessary to colonize a new location.

Spider Mites can physically damage plants by piercing them with their stylet in order to consume plant cell contents. The mites are also capable of feeding through stomata to minimize immune response. A Spider Mite infestation usually appears as stippling damage with small chlorotic spots visible on the top sides of leaves and a collection of small, 0.4 millimeter long, adults that can be orange, pale or dark green, pale or dark red in color. The mites can move somewhat quickly if disturbed, but they primarily stay in one place in order to feed and produce eggs and silk nests for protection, travel, and communication. Although small, single-digit incidental colonies can be missed, established populations create extensive networks of silk web that often cover the top of the plant. Due to behavioral cues related to temperature, light levels, overcrowding and plant nutritional quality, adults will often congregate at the top of established canopy colonies.

Treatments for Two-Spotted Spider Mites, like other pests, should be multilayered and holistic. Reliance on one or just a few treatment methods limits decision making options during supply and other emergencies. Some treatment methods can be ineffective against alternate avenues through which the Spider Mite can become established. There are multiple categories of integrated pest management techniques that treatment and preventative measures can be classified as. Some examples include: chemical, physical, cultural, biological, and others. I will explain a few methods in further detail using some examples curated below.

Despite its considerable toxin defense, agents like micronized sulfur products are lethal to Spider Mites. Horticultural oils can be effective suffocating agents that disrupt populations, but these are not recommended once Cannabis flowers and should be used during vegetative production only.

Two-Spotted Spider Mites are prey for many opportunistic predatory insects, like the commercially available Spider Mite Ladybeetle Stethorus punctillum (video) and Spider Mite Midge Feltiella acarisuga (video). In fact, if given the opportunity, Western Flower Thrips will consume Spider Mite eggs vociferously (video), but rarely do so because of the silk webbing that protects nest sites. The most common biocontrol agents are predatory mites, especially the specialist Phytoseiulus persimilis (video) and the omnivorous Neoseiulus californicus (video) which also feeds on pollen. Most of the commercially available predators that feed on the Two-Spotted Spider Mite are carnivorous and do not have alternative sources of food. Because of this, many commercially available predators cannot be prophylactically maintained; only released. This method can be particularly useful in contexts such as seasonal changes, when these mites are known to be more commonly encountered.

Two-Spotted Spider Mites are usually visible and can be detected on plants by the naked eye. New plants should be quarantined as best as possible for multiple days and searched thoroughly for evidence of these mites. Spider Mites are commonly transported through cuttings. While the adult mites can often be treated, their white spherical eggs can be a little more resilient and can reside cryptically inside small tufts of trichomes or in small crevices of plant tissue.

Integrated pest management is a multilayered, holistic system of techniques utilized to mitigate pest presence through preventative and active treatment. In my Zenthanol Guide for Integrated Pest Management, I cover the dynamics of integrated pest management through this perspective in order to help cultivators attain the best biosecurity measures possible for their cultivation context.

Get Support from Our Community!!

Do you still have questions or want to talk about your grow? We have a wonderful community of growers, and you are invited to join! If you are looking for advice and support throughout your grow, we encourage you to start a Grow Journal in our Grower’s Forum. It is a great way to share your experience and ask questions along the way!

We also have a Live Chat Room, which is a great place to ask questions, get quick answers, and chat with fellow growers. We welcome all growers who want to learn, share and grow together!

At Coco for Cannabis, we host grow challenges where growers can grow together and learn from each other in the spirit of collaboration. We invite you to join our next challenge! Our Plant Training Grow Challenge (PTGC) begins in August 2022, and we want you to sign up for it! All growers are welcome, and it is free to join!

Want to know more about grow lights? Our grow light guide is one of our most extensive and innovative tools for growers yet! The Coco for Cannabis Grow Light Guide is an independent and unsponsored resource for growers. Our goals are to demystify grow light metrics, share reliable grow light data and empower home growers with the best information about grow lights. We conduct independent grow light testing and have developed articles and resources to help growers understand the science of horticultural lighting.

In this video, Dr. Coco tests one and two of the new Mars-Hydro SP-3000s in different coverage areas. He uses 5 different PAR tests to explain and explore some of the key aspects of Grow Light Physics. Dr. Coco explains all the key metrics and shows how we use them to test and evaluate grow lights. We hope that all growers will find the video interesting, regardless of how much experience you have with grow light physics!

Need equipment for your grow? At Coco for Cannabis, we curated a list for all of your growing needs! We put the grower's interests first and only recommend products that we use, trust, and consider to be a good value. From finding the right grow light and equipment for setting-up your grow space, to curing, harvesting, and storing your final buds, our product and equipment guide has everything you need to set up or upgrade your grow!

Read All Our Articles

Want to read more great cannabis growing articles? Check out our Table of Contents for a complete list of articles and tutorials for all of your cannabis cultivation needs!

We may receive a referral when you purchase products recommended on our website. You support our work by following our links and using our discount codes when you make a purchase. As an Amazon Associate, we earn from qualifying purchases.

About Our Product Recommendations

At Coco for Cannabis, our mission is to help growers maximize the success of their cannabis crops by providing scientifically accurate information and sharing proven growing practices. The products that we recommend are the actual products that we chose to purchase and use ourselves. We do not accept sponsorship or advertising and will not recommend any product that we would not buy for ourselves. Please see our Product and Equipment Guide.

We may receive a referral when you purchase products through our links. This is the main revenue stream that keeps Coco for Cannabis up and running! When you click through our links and make purchases you are supporting our work! As an Amazon Associate, we earn from qualifying purchases.

See the winner & submit your photos! Sent in by Rooter