Welcome to my third attempt at completing a grow challenge! My GC plants haven't made it thus far, seems like a curse. But you know what they say, third time's the charm!

Container: 5 gallon bucket with self-wicking horizoned soil and a PVC pipe to deliver water directly to the rocky sand reservoir. System developed using Leighton Morrison of Kingdom Aquaponics method that I learned about on GrowCast.

Bucket I have running right now Despite my name I'm ditching Mycorrhizals this run, while they will still be present in some of my inputs and soil I will *not* be supplementing them like I normally would. Instead I'm focusing on trichoderma fungus. According to Brandon Rust, in his experience trichoderma provide a much more substantial impact on nutrient uptake and growth than mycorrhizae, especially in a short time. With autoflowers everything happens faster so anything that gets results quicker is always something I'm interested in. I'm using a product called Micro Root which contains two strains of trichoderma in a massive 20 million CFU concentration.

Scuffed seed in a sandpaper tube. Soaked in H202 3% for 3 hours, then soaked in water with a smidge of humic acid (to neutralize chlorine and chloramines) as well as a few grains of Micro Root (trichoderma). Rapid rooter pods were soaked in a similar solution pH of 6.3

Wow Myco 🤩 what a setup. You really know your soil biology. This will be a wonder to follow along. I love aquaponic, have you heard of the Hungry Bin vermicompost bin out of New Zealand. I'd love to try the compost from that system with aquaponics. Thanks for joining in and getting your bending boots on cuz I'm sure thats what will be required to train that mutha when she gets growin. Let's see what's she's got! ✊🏻✊🏻💪

We have liftoff! Cotelydons should be up within the day. Seedling is fully up and looking happy!

Loving these grow plugs! Seem to be keeping the seedlings very happy and going good. I have added two more seeds these were the backups but they are all good so far so I guess I'm running three plants in the challenge now. These are Black Strap a collaboration by Mandalorian and Brother Mendel. Unlike most of Mando's seeds these are feminized autos, not reg autos. Very excited for these genetics! The Black Straps were planted one day after on 8/10 but they are actually slightly ahead now (first true leaves are bigger than the Jogi) so I'm considering them on the same track. Hope that's okay!

Switching lights to 18/6 from 24 starting at 12:01AM 8/14. Dome is fully off now, set up an oscillating fan to gently sway the seedlings while the lights are on. Also giving them the musical treatment still, from seed these have been listening to the local college station! Good vibes only. Saturday with the Beatles tomorrow morning, that's gotta be good for cannabis plants right?

Another day and more growth, love watching them at this stage as the true leaves quickly become larger than the cotelydons. Black Strap #1 and #2 and Jogi #1 Good thing I planted some backups, Jogi is lagging it on growth. Not giving up on her but she's not progressing vs the other two that started a day later. Jogi OG is not making it. I told y'all my GC plants were cursed! I juked the curse with the Black Strap! Fingers crossed 🤞 Roots are popping out like crazy now on the Black Straps will be assembling the buckets soon and preparing for transplant. I go out of town for 5 days on Friday so they will be put to the test! From past experience they should be better off without my helicopter gardening at this stage.

Also seedlings have been receiving some light nutrition.

As you can see it's basically micronutrients and beneficial bacteria. Though Calcium is practically a macronutrient according to most cannabis plant scientists, which is why I like to make sure to start feeding it from the beginning. Mag is taken care of by seaweed and tap water. Normally don't start anything this early but they're in plugs so nothing there to help em along.

That is a comprehensive list of ingredients Growmie. These plugs look amazing. If I were a seedling I wouldn't want to grow up and have to expand beyond the comfort of that lovely sponge either.😊

Good progress on the second set of leaves from the Black Strap. These genetics are already showing their strength. Before transplant, seedling leaves have overshadowed their pods and are clearly rooted. Buckets being assembled. Credit to Leighton Morrison @kingdomaquaponicsllc for the outline There is a hole drilled at the top of the E horizon to allow overflow and I know the reservoir is filled. Big shoes to fill, these are living the outdoor life now. Praise the sun! Good morning little dudes! Dudettes rather. Feminized seeds. Ok. This will be the final morning update until I return from my trip, Tuesday the 24th. Bucket reservoir should easily hold them, the bucket pictured at the top of my journal has been going on two weeks without a refill.

Can't wait to see what kind of huge changes occur over the long weekend.

Have a great trip. You'll be returning to some huge growth and happy plants no doubt. 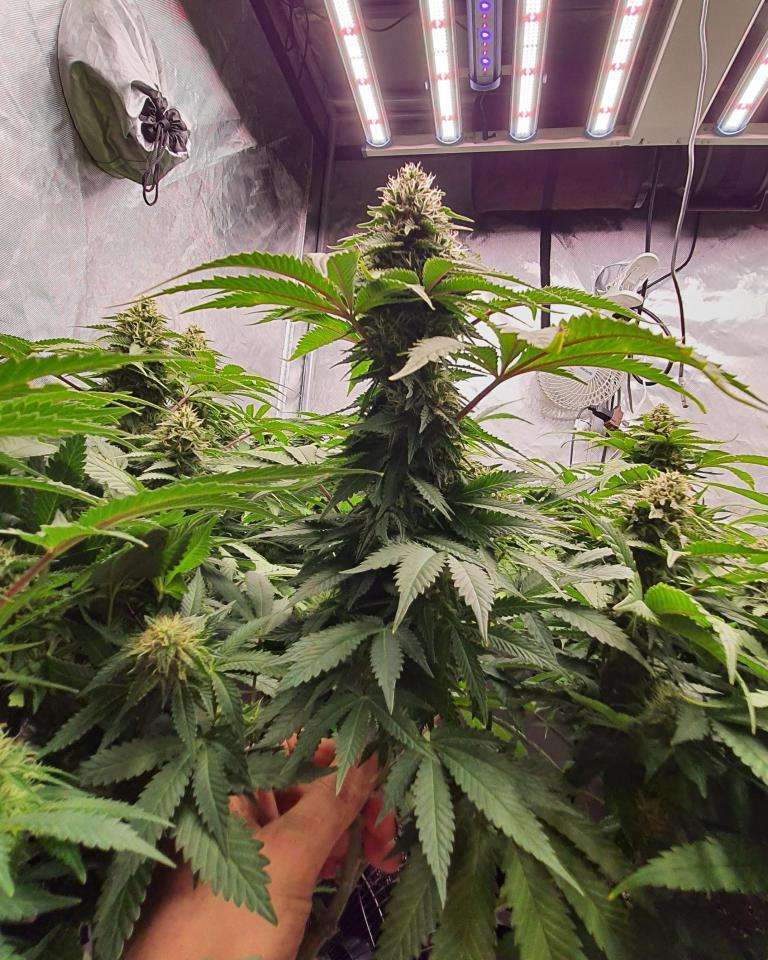 See the winner & submit your photos! Sent in by HempWithGg